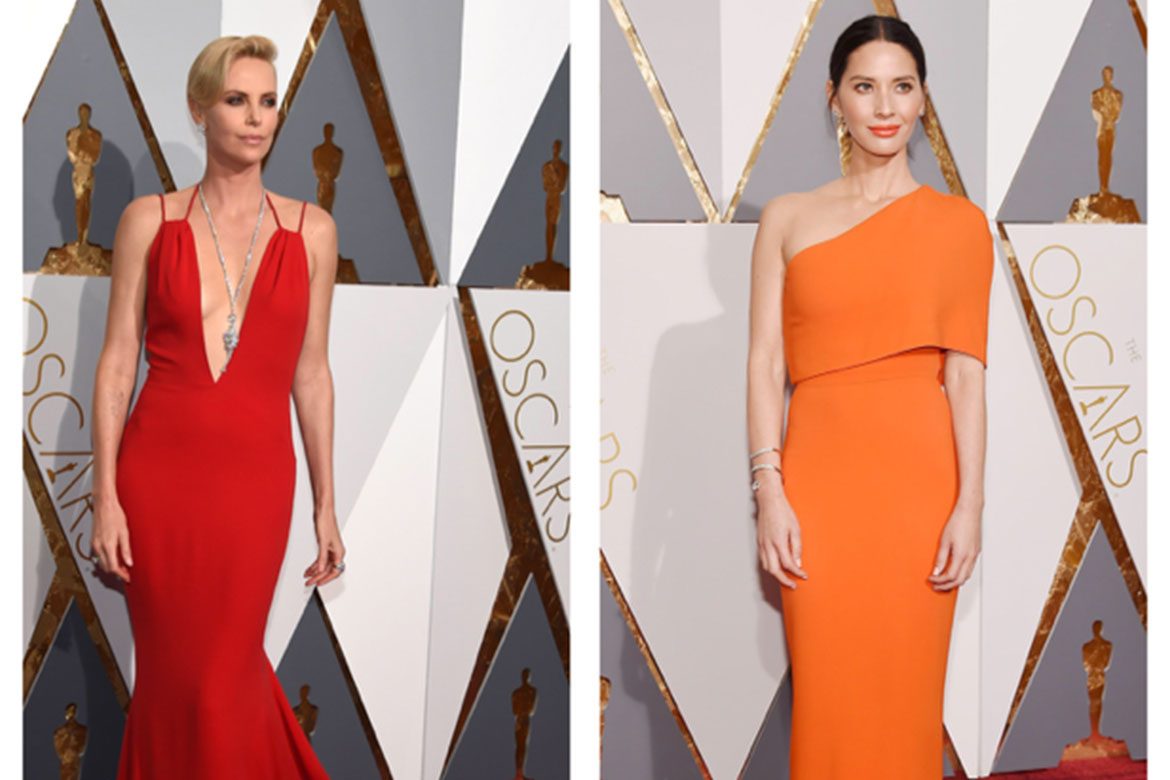 Who owned the red carpet this year?

It was a tie between the gowns with frothy and billowing trains and dresses which were almost diaphanous. Bright and bold colours, floral applique embroidery and peak lapel tuxedos emerged to be the key trends this season. Towering over everyone else was Charlize Theron in red Dior couture creation. Her strappy gown had a plunging neckline and she added a neckpiece for the great finish, bringing the focus to her decolletage. It’s always great to see vibrant colours on the red carpet, which is mostly dominated by a sea of blacks. Another bright-hued gown which caught my attention was Olivia Munn’s one-shoulder Stella McCartney number, that stood out because of a sensation of pristine softness it radiated. One of the key beauty looks which sent the Instagram into a frenzy was of Rooney Mara’s. She wore a sheer and embroidered Givenchy couture gown which had a center slit that exposed a hint of her legs. She accented the look with a bold lip and a sleek top knot. The rhombus slit at the waist exposed a whiff of her perfectly taut midriff making it uber-sexy.

Making a case for the cascading ruffles was the toast of the Oscars, Brie Larson, who rocked a ruffled Gucci number, which had a sheer overlay.

Nude dresses have been trending on the red carpet for quite some time now but this naked number on Diane Kruger clearly makes her ahead of the style pack. Her lingerie-inspired Reem Acra dress will go down in the history of the red carpet as the most delicate balance between sexiness and tastefulness. Mind you, it wasn’t an easy pick but the red carpet pro that Diane is, pulled it off with reassured confidence and elan. Transparency refuses to die down – be it the runways or the racks and Jennifer Lawrence’s pick of this Dior couture dress was bang on-trend.

Among the classic demure looks, Cate Blanchett was a hands-down winner in an Armani Privé gown embellished with Swarovski crystals and accessorised with Tiffany & Co. jewellery. Her mega-watt presence can rock any outfit under the sun or is that an understatement? Our Indian beauty Priyanka Chopra needs a special mention as she literally put India on the global style map. The Quantico lass looked like a million bucks in a Zuhair Murad creation. Besides, being a debutante at Oscars, she didn’t seem overawed and walked the red carpet with grace and confidence.

Channeling the on-trend techno femininity was Kate Winslet in a custom black silk Ralph Lauren gown and she managed to wreak the much needed shine and holographic appeal. Her Titanic co-star Leonardo DiCaprio looked sharp in a tuxedo by Giorgio Armani out-tuxing other men on the red carpet.